Tara Tyler's latest Beast World book, Windy Hollow, has finally released! To celebrate, I'm helping out with her blog tour today. Tara chose to interview me for it. Don't know why—I'm not involved with the amazing art for this series, and...well, I'm boring!—but here we go! And learn more about Windy Hollow at the end, too!

Thanks so much for being a part of my WINDY HOLLOW Release Tour & Taking Back BEAST WORLD campaign!

Heather graciously let me do a reverse interview on her. I wanted to find out more about her Artistic Process... I love that we are TT & HH! ha!

TT: How did you become an artist?

HH: Have always been one. Even knew as a toddler that I wanted this as my career. High school killed my love for it, though, and I ended up quitting for a while. Only returned in 2008, when the television show, Reaper—of all things—made me want to draw again.

TT: A toddler? That's incredible! I believe it's always good to take a break from your passion, and if it's meant to be, you go back to it. That's how I was with writing.

You have such a distinct style--where do you get your inspiration? or how did you develop it?

HH: Archie Comics influenced me the most growing up. Holly Golightly, Samm Schwartz, Harry Lucey, Dan Parent, and Fernando Ruiz were some of my childhood idols (and still are). Even a favorite artist I discovered outside of Archie as an adult—Gisèle Lagacé—later did work for them, so my inspirations continue to circle back to that freckled redhead.

TT: Archie is such a universal classic, great choice to admire--and look at them now with Riverdale! My son got me into that show. Love it!

Tell us about your portfolio - what have you done? what are you working on?

HH: Been doing webcomics since 2008. My horror comedy, The Undeath of Me, will premiere either late 2019 or early 2020. The first volume focuses on a door-to-door salesman who solicits a vampire one day. I also have another horror comic in the works, which will feature rebooted characters from Echo Effect, an older, cancelled series of mine.


TT: I loved Echo Effect! I know it's tough to put yourself out there, though. So glad you're still working and venturing into new stories!

Who's your favorite character to illustrate? (tough question!)

HH: My favorite always changes, depending on which project is my focus, but at the moment, I’d say it’s Ethan, my salesman-turned-vampire from The Undeath of Me. He’s prone to slapstick and melodramatic expressions, which is a delight to draw. Jay and Spencer, from the same series, along with Nicholas, from Echo Effect, are also among my favorites.

TT: I do the same thing when people ask me which is my favorite character/book. Melodramatic is hilarious and endearing, good choices!

Is this your full-time job?

HH: Yes. Years of failed job interviews gave me no choice but to be an artist full-time, haha. I also supplement my income by doing paid surveys online.

TT: Well, I completely understand. And with you being so talented, I want to see your work go big-time. I'm thinking of another project you'd be perfect for, but I have to flesh it out first. You know I always think bigger than my time allows... but I won't give up. You keep at it too! You're a fantastic artist!

Thanks again for letting me come over and dig into your artistic life. And thanks for helping me spread the news about WINDY HOLLOW, BEAST WORLD book 3!

Tara had a long journey to get this book published! 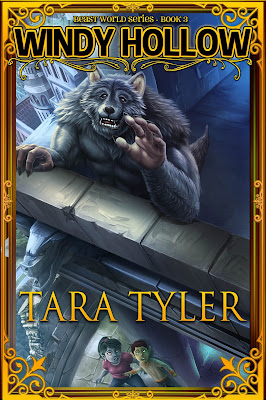 This summer, Gabe and his friends fly over the Great Sea for the wedding of the century: a dragon prince and a beautiful harpy. But Gabe can't relax on this vacation. Besides competing in rigorous wedding events, he overhears the nearby human village WINDY HOLLOW is in danger from an evil human scientist and a vengeful were-ogre experimenting on beasts. Gabe and his friends risk crossing the mountains to help, despite several warnings.

Maybe he's going too far this time, but he's in too deep to quit. It's do or die, hopefully not die! 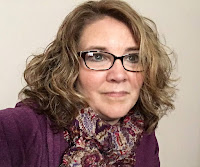 Tara Tyler has had a hand in everything from waitressing to rocket engineering. After moving all over the US, she now writes and teaches math in Ohio with her husband and one boy left in the nest. She has two series, Pop Travel (sci-fi detective thrillers) and Beast World (fantasy adventures), plus her UnPrincess novella series where the maidens save themselves. She's a commended blogger, contributed to several anthologies, and to fit in all these projects, she economizes her time, aka the Lazy Housewife—someday she might write a book on that... Make every day an adventure!

Don't forget to enter the giveaway!
Posted by Heather R. Holden at June 20, 2019